What is RIM Weighting? | The Benefits of Weighing Survey Data

It is a technique commonly used to weigh market research data to certain demographics such as age, gender, geography, income, etc. RIM weighting becomes more challenging and complex when weighing several different demographics, rather than just one. 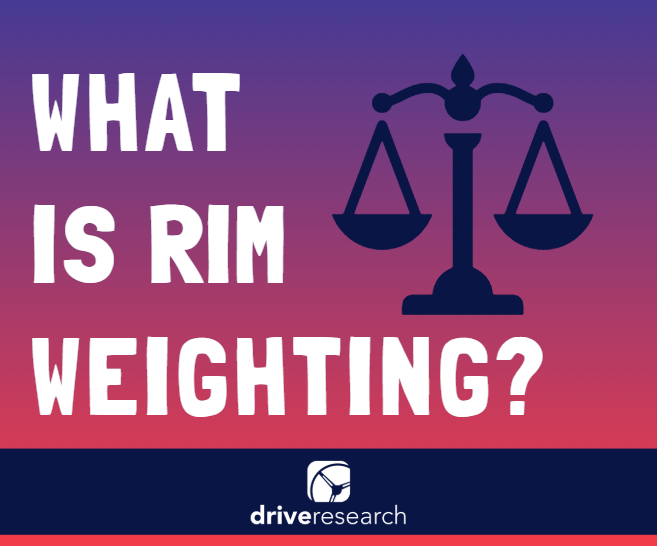 RIM weighting is a form of survey weighing to accurately showcase demographics among a population or customer base.

Why is RIM weighting used in market research?

RIM weighting allows research analysts to weigh each variable and question as an individual entity to assure each data point and demographic is accurately represented. For example, if when surveying a town with an even male and female population, but a majority of the survey respondents are from males.

This then is not an accurate representation of the town’s population, therefore research data analysts may choose to use RIM weighting to make the female responses count more than the male in order to have a more even split.

What are the benefits of RIM weighting?

While RIM weighting can involve many steps and iterations to be just right, it can be beneficial for those conducting market research studies. The main benefit of RIM weighting is the survey data will match the population or customer base you are researching.

When reviewing the survey feedback, researchers are able to review a smaller number of respondents as a true comparison to how a larger demographic of people think and feel.

This form of survey weighing is most commonly used when researchers are recruiting without a screener survey or have accounted for the screening criteria when sampling for respondents.

For example, a bank or credit union is completing member satisfaction surveys on the phone. The bank or credit union dials through 500 phone numbers, with no idea as to who will complete the survey. A large majority of older men may answer the phone and as a result very few middle aged women or people of other demographics will have completed the survey.

As a result, the member satisfaction survey is largely skewed to the feedback provided by older men and is not representative of their entire member base.

On the back end a bank and credit union market research company can weigh the data to match the financial institution’s member population to make sure all members and customers are represented evenly.

If interested in RIM weighting, consult a market research firm

With RIM weighting being more complicated in nature, it is recommended to contact a market research firm if you wish to use the RIM weighting data technique. RIM weighting involves an advanced analytics tool to perform in the back-end of your survey data that is not possible with most research studies conducted in-house.

Also, market research analysts understand the correct algorithm to use to not impact the data in a negative way. As with any survey weighting it is important to make sure the weights aren’t too extreme otherwise the feedback from a few respondents can count as a lot more. This results in poor and misrepresented data quality.

Let's go back to the example above of a town population being evenly split among men and women. After reviewing the data, it appears 50 of the responses are from males and only 10 are from females. It is not as simple as multiplying the feedback of the women by 5 to be even to the male population. This algorithm is dependent on multiple different factors rather than just looking at gender - an algorithm only commonly used my research analysts.

A way to avoid this misrepresentation, a market research firm like Drive Research would rather take this criteria into account before analyzing the data. A market research firm would recognize the client needs an even split of female and male responses in their sampling plan to minimize the impacts of the survey weighing.

In this example, instead of using RIM weighting techniques, a market research firm would like recruit more women to take the survey and close the study for males. Doing so will save the client money as it is a more effective way to collect survey respondents and less time and effort for the market research company.

Drive Research is a market research company located in Syracuse, NY. Our team has the knowledge and tools to design a robust market research study, should it be the right fit for your business.