A product with a strong brand reputation, one that has extended into multiple product categories, and has essentially become a household name in the past few decades.

But even the biggest of brands often go through bumps in the road before they reach the top.

Febreze was no different for Procter & Gamble (P&G) as it was almost pulled off the shelves in the late 1990s as a result. If not for clever observational findings through market research and a complete revamp of its marketing, Febreze would have become an epic failure for P&G.

This emphasizes the importance of new product development market research. Before we get into the Febreze case study, it is worth briefly outlining the value of this type of research pre-launch.

Febreze should be credited for using market research to understand consumer behavior around its product. However, when the team chose to engage in market research was too late. This failed launch of the product likely cost the company hundreds of thousands, if not millions of dollars. A small investment in market research in the early going would have prevented this.

Market research both eliminates risk and increases the chance of success. It eliminates risk of product failure but at the same time could increase the sales of the product 2X, 5X, or 10X+.

What can you learn from new product development research? Here are some outcomes:

The important piece to remember is doing your market research early. Pre-launch, not after the product has failed and you are adding to the cost and expenses for a turn-around. Set your product, service, or business concept up for success immediately. 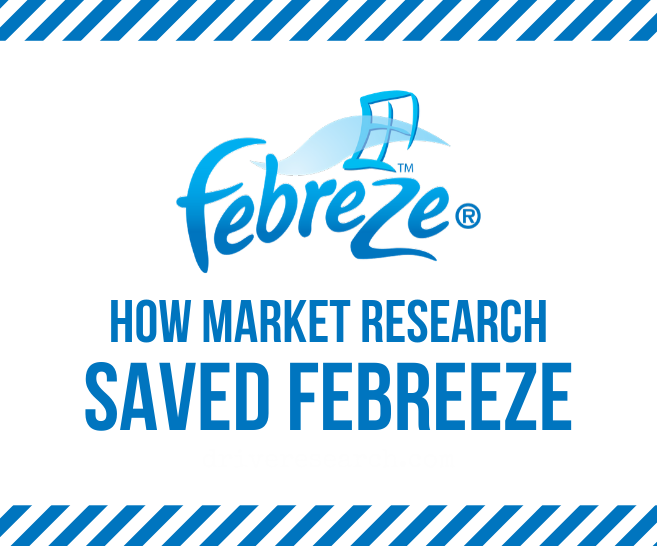 P&G first patented the odor neutralizing absorbing spray technology in its new Febreze product. The product was initially placed in test markets in the early to mid-1990s with a supporting marketing campaign.

Using television commercials, the campaign educated consumers on the new technology used in Febreze which could be sprayed on fabrics, carpets, furniture, and other items in households to neutralize and dissolve all odors.

This non-scented spray seemed to carry great appeal internally and P&G thought they were going to watch sales of this product take off thanks to this new patented innovative technology.

After months had passed and sales continually declined, P&G had come to the conclusion they had an official flop but couldn't understand why?

As written by Charles Duhigg in The New York Times (author of the book titled The Power of Habit), he explained the issues surrounding the marketing of the product and reasons why it sat on shelves. P&G and its marketing team could not understand why no consumers wanted this odor-neutralizing product.

Enter market research, which Duhigg further goes on to explain.

Ultimately, the marketing team wanted to find out "why?"

On one IHUT in particular, a team of two market researchers sat with a female homeowner in her living room. This home was particularly unique because of the 9 cats that were roaming throughout the home when the researchers arrived, all 9 of which decided to "sit-in" on the interview in the living room. You know what they say about cats and curiosity.

One researcher remembered the cat smell being so overpowering in the home that he had reached the point of gagging on a few occasions.

Soon after, the golden nugget of research information the marketing team was looking for came about through a conversation:

Marketing a product that neutralizes odors to a consumer base that inherently believes no odor exists in their own home is impossible.

This simple research interview and observation created a colossal shift in both the innovation and marketing of Febreze. Through other research interviews, the marketing team learned that many purchasers of Febreze didn't buy the product and use it to eliminate specific smells but rather used it after normal cleaning (e.g., spraying a carpet after vacuuming a room as further confirmation of "clean").

The Febreze innovation team went back and added specific refreshing scents to the odor neutralizing technology. The new spray would serve as positive reinforcement for Febreze users, with the pleasant scent serving as almost a reward reminder or what neurologists would define as your dopamine. Dopamine is the neurological part of your brain that controls your brain's feeling of reward for doing something. P&G eventually found its dopamine hook, albeit a few years late and after some wasteful spending on marketing.

All the more reason that simple market research and exploration research into consumer minds can pay huge dividends and completely revamp marketing campaigns. Even for products like Febreze that involved failed multi-million dollar launches.

How does an in-home usage test (IHUT) project work?

The Febreze market research team used a fairly popular approach and project-type to assess product failure. In many cases, if the product is being used in a home environment, it is critical for the research team to immerse themselves in the natural environment.

Much like if you are trying to understand how mothers use Campbell's soup to cook for kids at home. If you were researching this you would not want to sit 8 mothers down in a focus group room around a table and have them try to recall their thoughts, feelings, and behaviors when using the product. Try to center the research around the natural use of the product in the kitchen.

What are the steps for an IHUT project with a market research company?

Drive Research is a market research company in Syracuse, NY.

Need a quote or proposal for your business concept?