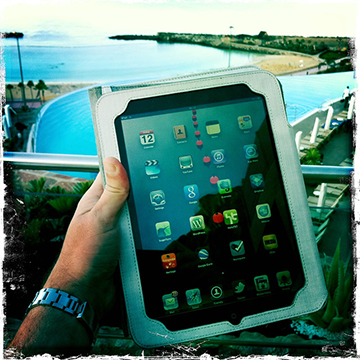 Intercept survey projects are one of the best ways to gather in-the-moment feedback from attendees at a game or an event. Intercept surveys, like the projects we complete in Syracuse, collect accurate and reliable feedback because the customer experience (CX) just took place. This differs from a traditional online survey, mobile survey, phone survey, or mail survey in that there is often some time that passes between the experience and the follow-up survey.

One of the most difficult parts of collecting on-site surveys at large events or games is the ineffectiveness of the WiFi or satellite (3G or 4G) network. At these large events the network often gets overloaded which can absolutely kill an online or mobile intercept survey being conducted on a phone or tablet.

With a poor WiFi or 4G connection, it often takes several seconds (or more) for the respondent or interviewer to move from question to question. Any delay or buffer switching from screen to screen can be frustrating and can extend a quick survey into a painstaking experience.

Offline intercept surveys are an excellent way to collect data without having to worry about a network connection while on-site.

What are offline intercept surveys?

Offline intercept surveys are questionnaires which can be completed on tablets and phones without the need for a WiFi or network connection. These survey completions are stored on the device or app. When the device accesses a network or WiFi connect the completed surveys and synced and uploaded. This helps intercept survey companies administer on-site surveys anywhere and everywhere without having to rely on an internet connection to do so.

What are the benefits of offline intercept surveys?

Without reliance on a network or WiFi, offline intercept surveys are quick to set up and administer. Respondents and interviewers alike can move quickly through a survey and there is no downtime from switching screen to screen and question to question. This saves the interviewer time if he or she is asking or administering the survey to a respondent. It also saves the respondent time if he or she is self-administering the survey.

In the past, many intercept survey companies chose to complete surveys via PAPI (pen and paper interviewing) because of the lack of a good WiFi or network connection. This added time to the survey to write and record responses and flip pages. Most of all it adds both time and cost to data entry. All of the paper responses need to be entered into a survey platform for analysis.

Offline surveys eliminate the need for clipboards, WiFi, and network connections. They are as easy as opening an app. Surveys can be administered through an interviewer or self-administered. Offline surveys are an excellent way to collect in-the-moment feedback quickly, cost-effectively, and efficiently.