Why Good Market Research Works (Even when you think it doesn't)

Before conducting a market research study, many organizations have a preconceived notion of how the results will turn out. However, in most cases, market research presents feedback and insights that are unexpected.

Below, our market research company shares an example from Ford to explain this exact sentiment. 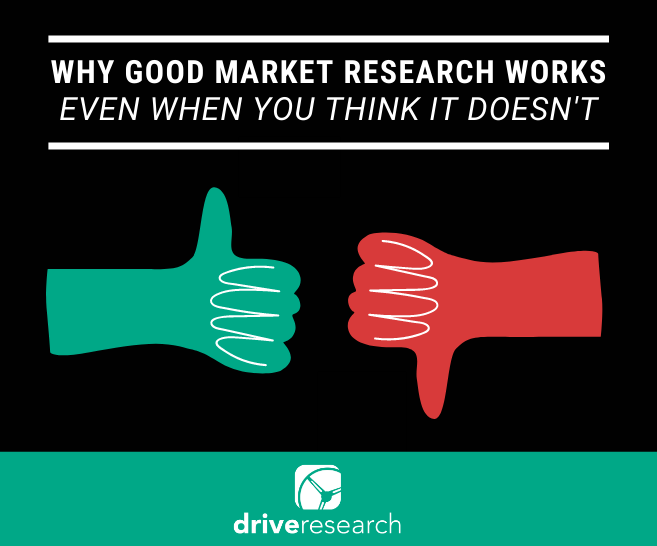 Here is the Story of the Ford Edsel

In the mid-1950s, the Ford Motor Company used the power of market research to produce a vehicle tailored to fit the desires of middle-class Americans.

To excite the public, Ford created a year-long ad campaign leading up to the release of the “car of the future,” the notorious Ford Edsel.

However, when consumers participated in a 10 year-long market research study that fueled the idea for the new dream car, the customers didn’t grasp the full concept of the vehicle, and as a result, it’s one of the ugliest poor-quality cars in automobile history.

Over a span of 10 years, Ford spent a total of $250 million on developing the Edsel, which was supposed to revolutionize the automobile industry.

The “car of the future” had 18 different versions, it was marketed to match each owner’s personality, but unfortunately, Ford’s fantasy never came to fruition. In reality, this brand of car was overpriced; it underperformed and disappointed the masses, and I’ll tell you why.

There are two main questions to consider:

Market research was still in the infancy phase during the time of the Edsel and provided the automotive company with inaccurate insights.

Ford had the right idea by incorporating focus groups, in-depth interviews, and introducing motivational research into perfecting the best car for the consumer. Still, the timing of the product was off, and the data did not match reality.

The researchers wanted to understand the consumer’s motivations to uncover answers to questions such as:

The automaker company was expected to sell over 200,000 Edsels in the first year on the market.

Ford sold less than half, and by 1959, it lost approximately $350 million on the infamous car, which prompted Ford to discontinue production and start from square one.

Even though the Edsel was an epic failure, Ford and other brands have a lot to learn from this experience.

Timing is everything! In the summer of 1957, after the release of the Edsel, the stock market plummeted, and Americans stopped by mid-priced vehicles and shifted their focus to surviving the economic crisis.

A year later, 1958 was declared the “worst year auto” since World War II; sales for automobiles continued to decline and so did the purchases for the Edsel.

During economic recessions, instead of buying gas-guzzling cars like the Ford Edsel, more people were purchasing cheaper, energy-efficient small-sized cars, such as the Volkswagen Beetle.

The market began to shift in the opposite direction of what the market researchers intended. This major shift in demand caused Ford to halt the Ford Edsel production indefinitely, but there is more to the story.

💡💡 Fun fact: Henry Ford’s son, the chairman of Ford Motor Company, Edsel Ford, strongly believed that the Volkswagen Beetle had no market in the U.S. Years later, he was proven wrong.

After years of researching the perfect car for Americans, Ford failed to add quality over quantity to the equation.

Ford’s intention was to push as many vehicles out as possible, despite the decrease in demand. Ford was ill-equip to live up to their own expectations.

When dealerships received the new car, it would often arrive with dissembled parts, and some parts would even be missing. This was because the Edsel didn’t have its own assembly unit at the Ford manufacturing plants and employees took little pride in building the vehicle.

Once the car was off the lot, many found that the Edsel had a multitude of maintenance problems. This prompted consumers to question Ford’s motives, and consumers refrained from purchasing the new Edsel.

In the 1950s, motivational research was gaining transition, and Ford used it to determine the Edsel’s personality to captivate consumers.

The research was also used to understand the consumers’ motivations and further predict their purchasing behavior.

Today, this type of research is often used for any significant product launch, but during the time of the Edsel, motivational research was not nearly as effective as it is today.

3. Flaws in the market research

The flaws in the market research include:

The future of the Ford Edsel was doomed from the start. With a tanking economy and an over-hyped marketing campaign fueled with misleading information, and outdated data, the Edsel was more of an American nightmare than the American dream.

Through this case study, many have learned that it is more important to rely on timely accurate research data than biased preconceived notions.

Fortunately, today, market research is more advanced than it was in the past. Therefore, using it to make important decisions is more effective and reliable than ever before.

💡💡 Fun fact: The story of the Ford Edsel is one of Bill Gates’s favorite case studies.

Contact our team today to learn more about our services: