Is your next market research project in Vermont? Before you get started, it would be helpful to understand the key statistics and demographics of this area to determine various components of the project such as:

Our national market research company often works with organizations based in Vermont or clients who are researching those who live in the area.

We’ve already set out to gather the essential data you need to get a running start on your next market research project.

Drive Research understands the key profiles of consumers in the Vermont community, which helps us gather insightful data, and which ultimately helps you make better decisions for your business. 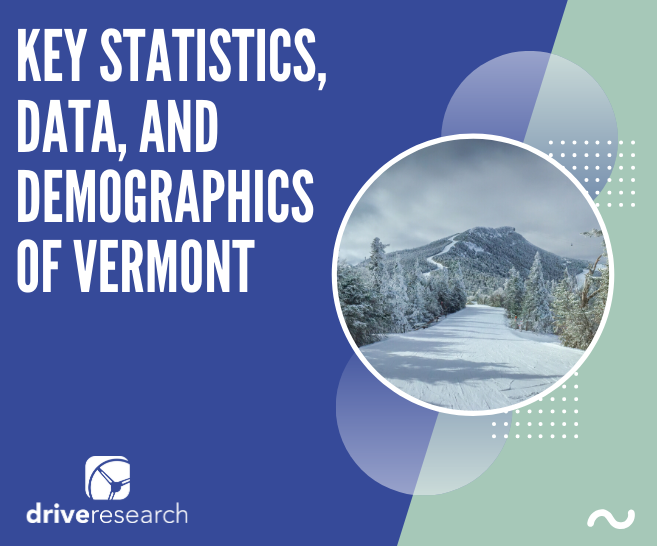 Who is Drive Research? How do we know so much about Vermont?

As we approach new geographies, we like to dive deeper into the demographics, data, and key statistics to better understand the specific region.

How do we do so? Drive Research uses an in-house proprietary data system that allows us to perform market analysis in any area, large or small.

Our system reveals essential information and valuable insights about a specific geography that can help us make better, more effective decisions for our clients in Vermont and surrounding areas.

The key statistics, data, and demographics detailed below on population, gender, age, income, education, and housing of Vermont residents were populated using our in-house data system.

Just under one in three (30.1%) of occupied housing units were renter-occupied, while just over one in five (21.8%) were vacant.

Moving into 2024 in Vermont, it is expected these percentages will stay roughly the same. Over three in four (78.0%) of housing units will be occupied, where just under half (44.4%) will own their home with a mortgage, one in four (25.5%) own their home free and clear, while one in three (30.1%) will be renter occupied.

Adults aged 25 or older in Vermont are highly educated. In 2019, it was estimated that roughly one in three (29.9%) were a high school graduate. Slightly more than one in five (21.5%) had earned their Bachelor’s degree, just under one in six (14.6%) had completed their Graduate degree, while fewer than one in ten (8.6%) had earned their Associates degree.

Roughly one in six (17.3%) had completed some college but had no degree. Moving into 2024, these percentages will remain the same.

In 2019, estimates reported that the top three MOSAIC groups in Vermont were Thriving Boomers (28.4%), Golden Year Guardians (14.6%), and Booming with Confidence (13.8%). Drive Research uses MOSAIC groups to identify segments of the population with similar demographics and attitudes, beliefs, and values. Below, these top three groups are further explained.

Thriving Boomers is the most dominant MOSAIC group in the state of Vermont. It represents 28.4% of households in this geographic area. This group can be described as empty-nesters in their 50s and 60s.

They are in the upper-middle class and likely live in quiet towns. These individuals are also likely to have downsized and moved into a smaller home or condo. This group is more likely to have an aged parent or young adult living with them. Key attributes for Thriving Boomers include cultured, smart shoppers, comfortable lifestyles, baby boomers, and fitness-minded.

Golden Year Guardians is the second most common MOSAIC group in Vermont, totaling 14.6% of households across the state. This group can be described as retired, health-conscious individuals who live modest, unpretentious lifestyles. Over half are widowed or live alone as their spouse lives in a nursing home.

Although they have well-established credit, many face financial challenges, struggling to get by on their social security checks and their pensions. Those considered to be Golden Year Guardians are commonly 75 years or older, enjoy daytime entertainment, and live city lifestyles.

Booming with Confidence is the third most prevalent MOSAIC group in Vermont, representing 13.8% of households. This group can be described as married couples in their peak earning years who are approaching retirement. These individuals are typically in their 50s and early 60s. Those who fall within the Booming with Confidence group are often highly educated, earn six-figure incomes, and have sophisticated taste.

Drive Research is a national market research company located in New York. Our team has the knowledge and tools to design a robust market research study for all types of organizations in Vermont.

Interested in receiving a proposal or estimate for a market research study? Reach out through any of the four ways below.