Looking to conduct market research in New Hampshire? First, you’ll have to dive deeper into some key statistics and demographic information to determine the feasibility and budget for your research.

When Drive Research, a full-service market research company, executes research studies throughout the country, we like to dive a little deeper into the demographics and other key variables that represent the specific geographic area. How do we do this?

Our national research company uses an in-house, secondary data system to analyze any city or state. Doing so reveals valuable insights that can help us make better, more effective decisions for our clients serving their communities and beyond.

The data below regarding the population, gender, age, income, education, and housing of New Hampshire was populated using said in-house data system. 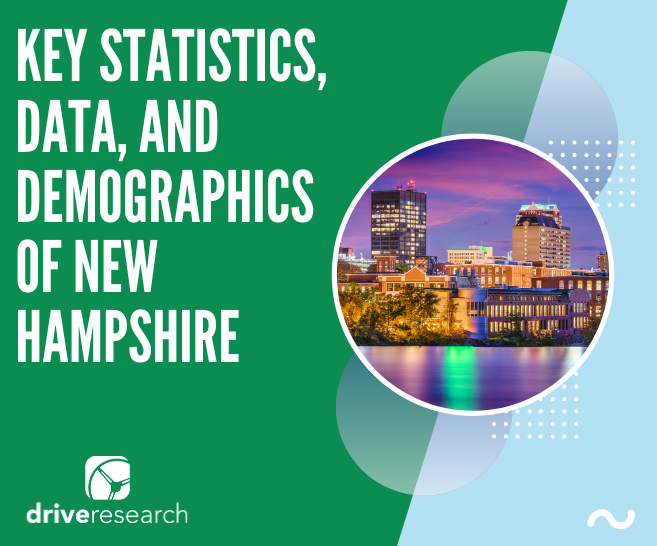 According to 2018 estimates, the population of New Hampshire is mostly college-educated. In 2018, estimates show that 28.6% are high school graduates, 18.9% have completed some college (no degree), 9.9% have their Associates, 21.6% have completed their Bachelor’s, while 13.2% have a graduate degree.

In 2018, estimates reported three dominant MOSAIC groups in New Hampshire were Booming with Confidence, Thriving Boomers, and Significant Singles. Together, these three groups make up nearly half of all households in New Hampshire.

MOSAIC groups are used to identify segments of the population with similar demographics and attitudes, beliefs, and values. Below, these three groups are further explained.

Booming with Confidence is the largest MOSAIC group in New Hampshire, representing 19.3% of households. This group can be described as married couples in their peak earning years who are approaching retirement. These individuals are typically in their 50s and early 60s. Those who fall within the Booming with Confidence group are often highly educated, earn six-figure incomes, and have sophisticated taste.

Thriving Boomers represent 18.9% of households in this geographic area. This group can be described as empty-nesters in their 50s and 60s. They are in the upper-middle class and likely live in quiet towns. These individuals are also have also likely downsized and moved into a smaller home or condo.

Drive Research is a national market research company located in New York. Our team has the knowledge and tools to design a robust market research study for all types of organizations in New Hampshire.

Interested in receiving a proposal or estimate for a market research study? Reach out through any of the four ways below.