March Madness | What are the Odds?

They’re playing basketball. We love that basketball. Anyone else feel like dancing? 64 hopeful NCAA men’s division basketball teams sure do (well, technically 72 teams but no one cares about the games until Thursday). For most sports fans, March Madness is better than their birthday and Christmas combined.

For us fans of statistics, data, and research, we know there's more to the tournament than just basketball. On and off the court there are hundreds of facts and statistics about the NCAA tournament. Here are a few of our favorites! 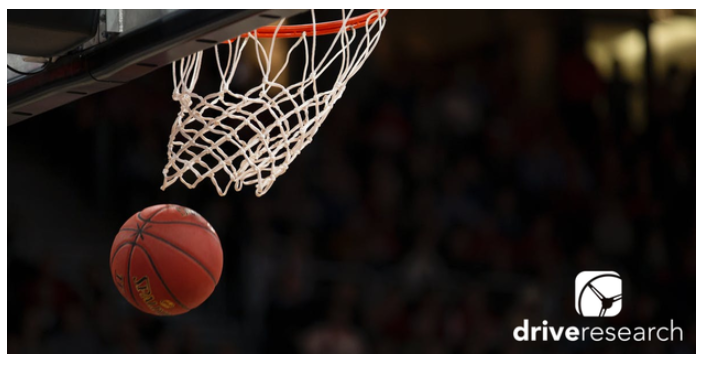 The NCAA tournament is one of the biggest and most anticipated sporting events. Check out March Madness by the numbers.

Before Minnesota and Louisville tip off on Thursday afternoon, roughly 70 million NCAA tournament brackets will be filled out. What are the chances yours will be the first ever perfect March Madness bracket? Not high.

In fact, you’re more likely to have identical quadruplets, be elected the President of the United States, or with the lottery than you are to craft a perfect March Madness bracket.

The odds of a making an error free NCAA Tournament bracket is 1 in 128 billion.

Odds of an upset

If every year of the NCAA tournament, a team’s seed determined the outcome of each basketball game then March Madness wouldn’t be so mad. Upsets happen and they can very easily turn March Madness into March Sadness for fans.

Think back to last year’s tournament when No. 16 seed, UMBC defeated No. 1 seed, Virginia to make NCAA tournament history. “I picked that game”, said no one ever.

The likelihood of a double-digit team overcoming an upset in the NCAA Tournament is promising. If searching for your Cinderella, look to a No. 12 or No. 11 seed teams. 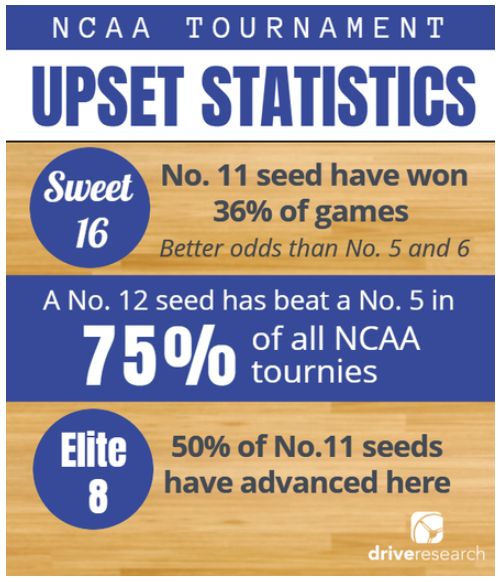 While it hasn’t been deemed a national health crisis, March Madness has caused a lot of basketball fans to call in “sick” from work. With games often starting at noon and lasting through midnight, the consistent rollercoaster of emotions can take a toll on the body. The only way to recover is to rest on the couch (or barstool) instead of an uncomfortable office chair.

Office productivity will still see a decline for March Madness fanatics still working a scheduled 9-5. The average employee will spend up to six paid hours focusing on NCAA tournament related activities. 56% of Millennials specifically are willing to miss a deadline to watch a March Madness game. Those dang Millennials.

For most employees the top distraction from the NCAA tournament is watching basketball games and scores via sports apps, with office chatter discussing March Madness being a close second.

March Madness by the numbers

Drive Research is a NY market research firm located in Syracuse. We work with clients to create custom market research studies to obtain data and answers to the most challenging questions facing their business.

Questions? Need a proposal? We are ready to help!