How Data Analytics is Changing the Sports Industry For Good

The field of data analytics is expanding into new markets every day. Today, sports analytics is where research analysts are making their next leap.

Not so long ago, players and coaches reviewed game film and made changes to their strategy solely based on the footage. Today, in almost every sport, teams look at the game film with a new sense of enlightenment.

All players and coaches have access to the percentages of any major statistical category to improve their game plan. It’s now possible to know any player's strengths and weaknesses, without having to send a scout out to watch every player.

Sports analytics is changing the way your favorite team makes decisions, drafts players, prepares their defensive strategy, and much more.

How did data analytics transition into the sports industry?

Sports analytics came to the forefront after the Oakland A’s and Billy Beane, the Executive Vice President, triumphed over the competition.

Beane hypothesized his team could win games using players with the highest on-base percentages, which was far outside the norm of a traditional approach. Long story short, he was correct.

His team recruited and signed baseball players fitting into his theory. Using unconventional “baseball” players made the team wildly successful. Since then, and across every major sports platform, sports analytics has emerged as its own position within an organization.

Today, every move a player makes, every decision, every shot, assist, goal, and pass is tracked. This information is gathered, analyzed, and used to help the players and team improve their performance.

This doesn't just have to apply to your favorite sport's team. See how data analytics can improve businesses everywhere.

How do they collect data for sports analytics?

In the National Basketball Association (NBA) starting in the late 2000s, cameras were installed in all stadiums to better track player performance. The cameras tracked everything during the game. Each player's movements, shots, blocks, picks, and over 500 other moves are recognized and recorded by this software.

Once recorded the information is sent to the team for further analysis. Each NBA team employs a team of analysts to comb through the game film for insight to help the team succeed.

In soccer, teams and analytical staff also collect data on almost every aspect of the game and its players. Teams can easily recreate games and use sports analytics to show players areas in which different decisions could have been made.

Using monitors on the player’s bodies with a combination of the game film recorded, the analytics team recreates every step, shot, and pass a player makes. Analysts comb through this raw data and compare it to data around the league(s).

As a market research company, we can appreciate this methodology. In fact, Drive Research conducts data collection and cleaning every single day for our research studies.

What is sports analytics used for?

Clearly, players and coaches benefit from sports analytics. Some argue a player needs to make the right decision during the game rather than rely solely on the data. The player will always have the final say during the course of a game. Sports analytics are supposed to be used as a tool that helps players and coaches succeed, not a way of control players during game time.

Through sports analytics, players are able to understand where they excel and where they don’t. This creates an effective strategy for each player. Simple information like, “You shoot better from the left side than the right,” can help a player be better for his or her team.

Coaches enjoy sports analytics because they can develop a better game plan and create a strategy around their team’s strengths and their opponent’s weaknesses. They can look at opposing player’s tendencies and relay that information to their players.

How is sports analytics changing the game?

In the NBA, sports analytics has revolutionized the sport. It has changed the way every team shoots the ball.

In the not so distant past 3-point shots were rare and seemed to be the once in while shot where the fans went crazy if it dropped. Now, everyone shoots them, from all around the arch.

Ever wonder why this shot has gained so much popularity? Sports analytics! 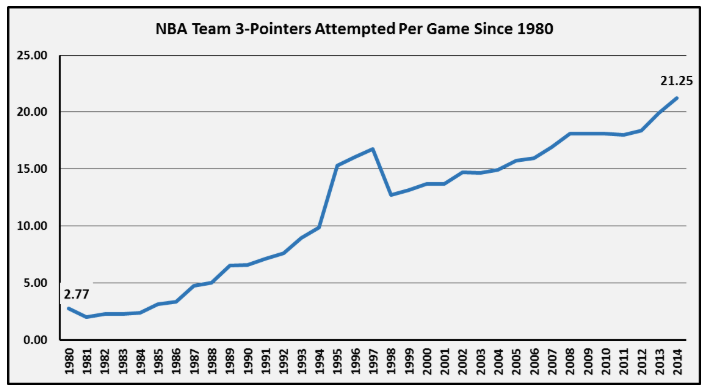 The graph above shows how in the past ten years 3 pointers are on a dramatic rise. These shots are worth more points and a missed 3 pointer can still result in a rebounded play for 2 points.

In the world of soccer, sports analytics helps teams recruit the best statistically significant players who may have been overlooked. Coaches and recruiters can use sports analytics data to draft and sign players who may not be as flashy as well-known players but are just as productive. These players, who were once passed upon, can be signed and bring tremendous value to their team.

Drive Research is a market research company located in Syracuse, NY. Our team has the knowledge and tools to design a robust market research study, should it be the right fit for your business.