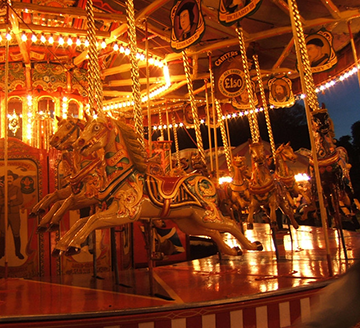 A full-service advertising agency in Rochester, partnered with Drive Research to conduct market research at the 2018 Great New York State Fair. The 2018 Fair attracted record attendance with over 1,279,010 attendees over the 13 day period from Wednesday, August 22 through Monday, September 3 (Labor Day). This set a new single year attendance record for the Fair.

A large amount of ZIP Codes were collected from Fairgoers in 2018 (nearly 15,000 from attendees). The ZIP Code data represented a sample of more than 1% of the total ~1.28 million Fairgoers. In addition, the follow-up email survey sent to Fairgoers obtained nearly 3,000 responses creating a margin of error of a highly reliable +/- 1.9%. This offers a high degree of statistical reliability compared to past sample sizes of on-site intercept surveys conducted at the Fair totaling around 600. The change in methodology for 2018 produced positive returns.

This is the official New York State Fair sponsored survey commissioned by New York State each year. It offers the most accurate and credible feedback for the event. Learn more about the objective, approach, and outcomes in this case study post.

A look at the Drive Research Survey Team at the 2018 New York State Fair. The team did an outstanding job collecting ZIP Codes and emails from Fairgoers across each of the 13 days of the Fair.

The objectives of the market research include understanding the attendee ZIP Code origin, general perceptions of Fairgoers, the reasons for attending, the appeal of exhibits and other attractions at the Fair, as well as attendee origin and demographics. This data was used to create a fact and evidence-driven marketing campaign for the client. This market research will serve as a roadmap to improve marketing and operational strategies as well as other secondary objectives.

To address the objectives at-hand, Drive Research recommended conducting on- site market research with attendees of the New York State Fair. Several options were presented before deciding to move forward with strictly ZIP Code and email data collection on-site with a follow-up email survey to be sent the following day. With the email being sent within 12 hours of the visit from the prior day, the experience at the Fair was still very fresh in the minds of respondents. Staff was assigned over the 13-day period at the Fairgrounds. All 10 staff members to collected ZIPs and email addresses of Fairgoers (if offered).

Drive Research utilized the feedback obtained from the advertising agency and the New York State Fair to revise the draft survey document for programming. The survey draft incorporated questions from the prior year(s) of on-site surveying at the Fairgrounds in order to track data trends over time. Drive Research updated the survey script to address new objectives or research topics that the client wanted to focus on including the new Exposition Center. The Drive Research team suggested new questions and wording for these topics.

Once the survey document was finalized, it was programmed into our survey software and tested using our in-house survey domain surveys.driveresearch.com. Each email survey took approximately 5 to 10 minutes to complete and the script included approximately 30 to 40 questions. Open-ended questions are free text responses with no button selections for respondents. These open-ended questions were categorized and coded in the final report and took considerable time to read through and analyze considering the large sample size of nearly 3,000 responses.

Another look at a few team members of the Drive Research on-site team at the New York State Fair in 2018.

The interview team of 10 with an on-site manager was present at several gates and high-traffic locations throughout fieldwork. The fieldwork for each interviewer will be 5 hours per day beginning at 3:00 p.m. Surveys were administered through tablets with offline capabilities to avoid delays in Wi-Fi or 3G. The client was updated throughout the fieldwork on progress.

Drive Research had staff members go to entrances and other high-traffic locations of the Fair to collect: (1) ZIP Codes and (2) emails for a follow-up experience survey. These 2 questions were drafted for review with the client and New York State Fair and then programmed into a separate and shorter form for the survey team.

ZIP Code was asked and collected first and if the participant has time, the email was collected as well. The email surveys were sent each morning to the prior day’s emails collected with the full script of survey questions. These new staff members collecting ZIPs and emails were assigned to a similar schedule to ensure the team obtains a broad representation of visitors. The process was much more effective and efficient than conducting the full intercept survey on-site.

Not all respondents who provided ZIP offered their email. In addition to collecting on-site surveys in-person, a web page was created to allow visitors to enter their ZIP Code and email survey to participate on the New York State Fair website. This was limited to one entry per person.

All responses were checked for data quality, duplicate emails, and duplicate IP addresses. Those who fail quality checks were removed from the final data file. In addition,13 $100 Amazon gift cards were raffled off to all survey takers who participated in the online survey via email. A new winner was chosen each day. At the conclusion of the 13-days of fieldwork, one winner was chosen to win a medallion (free admission to the Fair for life).

The market research report was compiled into a PowerPoint document for the client using the template developed. Drive Research also used data visualization techniques to enhance the report including an executive summary, strategic implications, and several maps. Drive Research debriefed with the client and the New York State Fair at the conclusion of the market research through a scheduled meeting.

The findings remain confidential with the Drive Research, the advertising agency, and New York State Fair teams. The survey was designed to answer these questions:

(1) Where do Fairgoers come from when attending?
(2) What is the Fairgoer profile based on demographic and lifestyle characteristics?
(3) What role does media play in informing visitors about the Fair?
(4) Did Fairgoers go the new Exposition Center and how did they like it?
(5) Why do visitors attend the Fair and what are their attendance habits?
(6) What are visitors’ perceptions of their overall Fair experience?
(7) How much do visitors spend at the Fair?
(8) Which attractions do Fairgoers visit and how would they rate their experiences?

A popular picture and #selfie spot at the NYS Fair in 2018.