Drive Research once again conducted the official New York State Fair survey in 2017. The team worked directly with the New York State Fair administration and management, the advertising agency managing the the Fair, and the market research handling the analysis and reporting. The Great New York State Fair ran from Wednesday, August 23 straight through to Labor Day on Monday, September 4.

This case study is a recap of the market research project from our intercept survey company in Syracuse, NY. Although we work with clients across the country, it's always a pleasure to work with with clients in our local area. Particularly the New York State Fair, which has such a large impact on the Central New York economy each year, bringing in over 1 million visitors to the fairgrounds over the 13-day period. 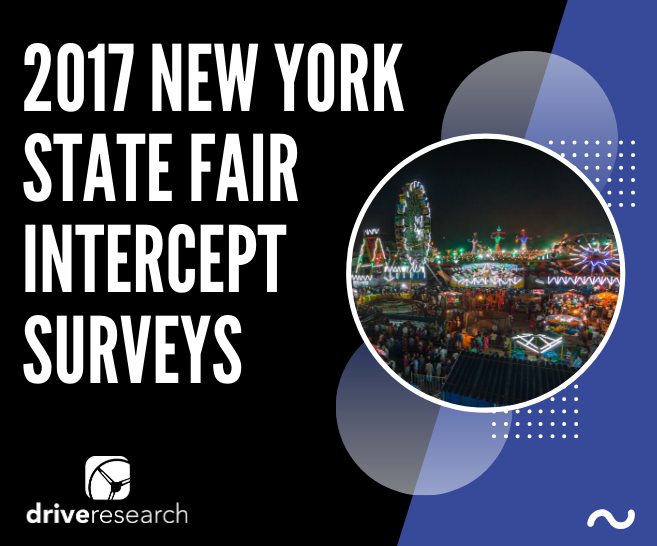 The goal of the New York State Fair survey each year is to collect feedback from fairgoers to drive improvements for the following year. The survey is commissioned by the New York State Fair and its advertising agency to assist with marketing, operations, and strategy for the following year. Intercept surveys are an excellent way to collect in-the-moment feedback from fairgoers as they exit.

Here's more information and 4 reasons why in-the-moment feedback collected through intercepts offers some of the highest data quality.

A total of over 600 surveys were completed across the 13 days of the New York State Fair. The interviewing team had an official New York State Fair tent, signage, and shirts for the event. These value-added items help solidify credibility among the survey team. The back of the shirts stated "Share Your Experience" to raise awareness of the team as fairgoers entered the event.

Interviewers rotated between the Main Gate, Gates 3, and Gates 4 throughout the Fair. The interviewing team aimed to achieve a balance and representation from all gates and demographic mixes of respondents. This included age, income, ethnicity, and ZIP Codes.

The team spread out the number of completes over the 13 days and had a quota to meet each day. The intercept survey team arrived on-site at approximately 2:00 p.m. and left each night around 7:00 p.m. or until the quota was met.

The survey itself covered a variety of topics from number of day(s) attending, awareness of changes, drivers to attending the Fair, exhibits and shows attended, Chevy Court, advertising and marketing, demographics, and other topics.

The surveys were administered by both tablet and paper. All intercept survey team members were equipped with a tablet with access to both the WiFi network and a mobile hot spot. As is the case at many large events, the network often gets overloaded particularly if there are over 100,000 people attending the Fair located in just a few square miles. For back-up purposes each intercept survey interviewer was also given a clipboard with a printed survey in a booklet format.

Although the results remain confidential with the New York State Fair, advertising agency, and market research company sponsoring the intercept surveys, the analysis and findings are incorporated into 2018 marketing and strategies. Feedback from fairgoers in 2017 help make a better Fair in 2018. The results create action and changes at the fairgrounds which will once again be tested in 2018. Several attendees to the Fair stopped by the Drive Research to tent to thank the team for implementing some of the feedback for the 2017 Fair.

With the surveys being conducted on-site and in-the-moment as fairgoers exit the Fair, the client understands the value and accuracy in the feedback. In addition to the survey feedback, the team also serves as a nice value-added for the New York State Fair to help answer questions and navigate fairgoers on the grounds (if needed). Beyond those randomly selected to participate in the survey several interviewers stopped by the New York State Fair tent to offer feedback on their Fair experience.

Drive Research is a market research company in Syracuse, NY. Are you interested in conducting on-site or intercept surveys at your event or location? Contact us for more information and a quote at info@driveresearch.com or by calling 315-303-2040.