One of the most common types of market research (and arguably the most exciting) is when data is collected around a new idea, concept, or project. This new product development research is often highly confidential and proprietary and it requires research participants to sign waivers and confidentiality statements. The market research is aimed to collect feedback, test demand, and make improvements to a product or service before it hits the market.

Whatever the case may be, here are 5 product failures from the last decade (or so) and how some simple market research could have helped prevent failure or at least eliminate some risk. 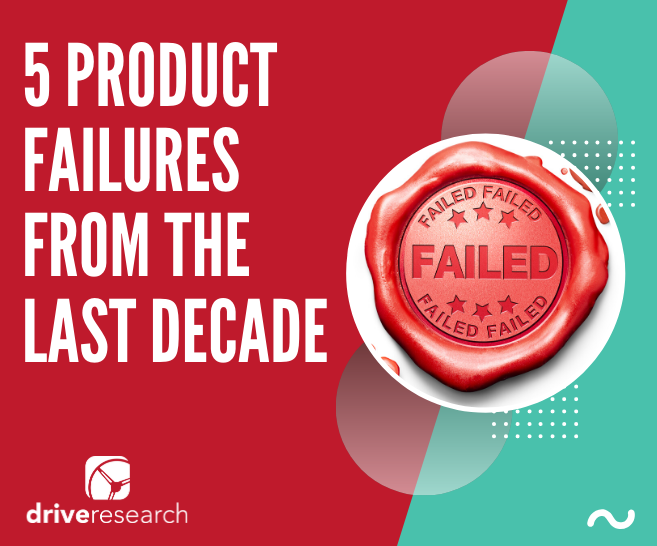 Perhaps this issue falls more on the developers and the engineers than the market research. Although if asked, I am sure respondents would rate "the ability of a phone to catch fire quickly" fairly low on a 1 to 5 scale in a focus group. At least Galaxy Note 7 users couldn't immediately jump on social media to voice their frustration after it happened. Perhaps Samsung was thinking ahead? This takes navigating Facebook on a cracked screen to a whole new level. Still have a Note 7, keep a fire extinguisher close by, I guess.

Because those who love to eat french fries immediately think of eating healthier french fries? It reminds me a bit of low-fat ice cream. Why bother right? Nonetheless, Burger King rolled out Satisfries in 2013. The idea was to jump on the health bandwagon other fast food and fast casual restaurants were able to offer consumers. Satisfies offered french fries with 30% fewer calories and 40% less fat.

Yet, the Satisfries still had more calories than their competitor's McDonald's small fries and cost more than an order of regular fries at Burger King. Not so much a win-win right? Turns out customers rated these fries very low on the Satisfraction scale. See what I did there? Yeah you did.

When traditionally unhealthy chains like Burger King attempt to make a brand transition to healthier options it creates misconception and confusion among customers. When a consumer wants to order french fries over all other fast food options, they are likely being motivated by taste, not conscious of health.

As a side note, I actually enjoyed these. Unfortunately, my 3 orders over the 12-months accounted for 43% of total sales across the United States.

These Satisfries may have sounded like a good idea in theory but when combined with the Burger King brand and type of product, a demand survey which analyzed motivational factors to purchase would have likely pointed towards this downfall.

ESPN has a strong brand. With mobile phones growing in popularity across the globe, this move seemed to make so much sense in 2006. ESPN essentially tried to become its own cell phone provider by delivering programming directly to users. Unfortunately, the company only signed up 30,000 subscribers but needed 500,000 to break even.

The first issue? The price point. ESPN wanted $200 for each phone along with a monthly package of $65 to $225 to access premium ESPN sports coverage. This would force people to abandon former carrier plans and family bundles. Understanding this thing had no chance in the early going after launch, ESPN cut ties on the venture less than 1-year after it launched.

The good news was a lot of the infrastructure and strategy is built into the same mobile apps and digital content you access on a daily basis now through ESPN (notifications, score alerts, etc.) You're welcome.

As cool as the same side of the pillow you are currently sleeping on.

However, the small group of ESPN The Phone users, do seem to miss the flip phone functionality the device offered in 2016. Don't we all miss flip phones? There's just something satisfying about snapping that lid down after you see the Mets lose their 7th straight game after leading by 6 runs in the 8th inning. A simple swipe on the smartphone to turn it off is not the same as a snappy flip.

Market research, through either focus groups or a quantitative survey, could have identified some of these user hesitations and market barriers to adoption for ESPN. Sure, they would expect to acquire some hardcore brand loyalists but would there be enough casual sports fans who adopted the phone to make the launch worthwhile? Apparently not.

Doesn't everyone love the cheese finger residue left over from eating a bag of Cheetos? If that's not enough, Cheetos gave consumers the option to get that same sensation on their lips, and reduce chapped lips as a side benefit. As long as your spouse or significant other doesn't mind you smelling like a bag of Cheetos around the clock. Have you wondered why your dog was following you around the house?

This is one where I don't think there is any excuse for not using market research. It's a product launch where I truly believe a guy named Doug was sitting at the marketing lunch table in the Cheetos factory and said to himself, "You know what? This could work." I am not sure how it made its way up the ladder and on shelves, but it didn't last long.

Focus groups anyone? Even a small group of respondents who have likely shot this product development down. They did accomplish one thing by forcing me to write about this product failure, I now have a sudden craving for Cheetos. Well played Frito Lay, well played.

Because when I think of Cheetos I immediately jump to I wish they had a product I could smear on my face.

It seems like this two-wheeled motorcar has been around forever right? It operates on two wheels with controls and handlebars which allow the user to move from place-to-place while standing on the platform. No matter how you slice this, people using it look flat out goofy. See the failure of Google Glass.

Segue to a similar product. Yeah, you caught that too right? A few holiday seasons ago, hover boards made their way into the main stream which were pretty much a Segway minus the podium pole and controls. Think Back to the Future Part II where Marty rips off the top-end of the skateboard.

How did that work out? You guessed it, these hoverboards spontaneously combusted and caught on fire. In retrospect, this seems to be a common theme across our products in this post. Maybe future focus groups should integrate extensive fire-testing prior to the research.

The Segway was supposed to revolutionize travel but has never really caught on. However, I will always be a fan of the product for the dry humor it supplied Gob in Arrested Development for much of Season 1. That alone makes me happy this product launched.

Although I am sure research was completed on this product, perhaps some iHUTs (in-home usage tests) would have done the trick. As the participant rode the device, analysts could have asked questions and assessed the potential of the product. All while trying to control their laughter as they watch a man in a business suit and bike helmet lazily hover around his driveway.

We hope you enjoyed reading our post on 5 product failures of the past decade (or so). If you are developing a product or service and are looking to avoid mistakes like these, contact our team.

Interested in learning more or working with our team? Contact us at info@driveresearch.com. Yes, unlike many companies we actually check our info inbox on a regular basis. Don't believe us? Try it.

Or for those of you who prefer starting your conversation with Drive Research by phone, have no fear, we can also accommodate you by calling 315-303-2040.