St. Patrick’s Day is coming up, and we’re excited to have something to celebrate in the midst of another Central New York winter. What will the annual parade look like for Central New Yorkers this year? We have some data that will help paint a picture.s

Drive Research, a Syracuse-based market research company, just wrapped up its second annual CNY St. Patrick’s Day Parade survey which asked questions to area residents about their thoughts and typical activities surrounding the annual parade. The online survey received 345 responses from those who live within a 15-mile radius of the city of Syracuse.

The survey was shared via randomly targeted Facebook postings. Drive Research fielded the survey from March 8 to March 11, 2019. Respondents took an average of 2 to 4 minutes to answer the 9-question survey, likely in the spirit of the holiday by the end. The paid Facebook post reached over 5,000 CNY residents.

Keep reading below to get an inside look at the 10 most interesting findings from the CNY St. Patrick’s Day Parade survey. 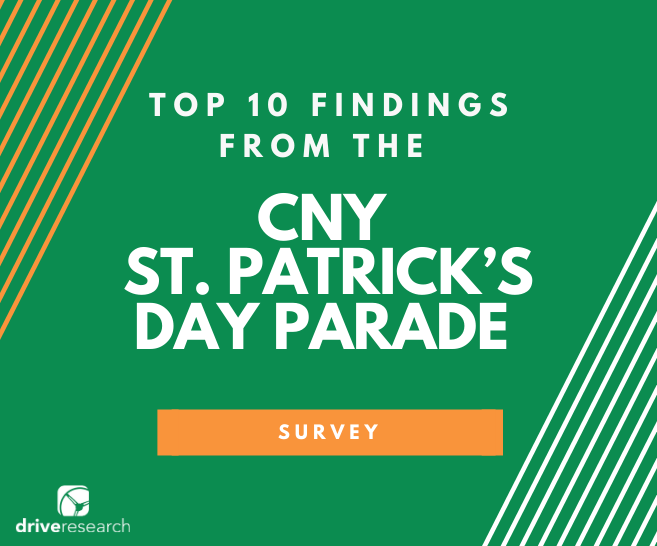 Excited for the CNY St. Patrick’s Day Parade this year? We decided to take a look at what CNY residents thought about it all. Check out the top 10 fun facts from the study.

1. You will see more of your friends at the parade this year.

Parade attendance in CNY is expected to increase this year. Over half of CNY residents surveyed plan to attend the parade on Saturday (58%), which is slightly more than the results gathered last year (+5%).

2. Most people don’t go to the parade just to watch.

The majority of CNY residents plan to attend the St. Patrick’s day parade this year to celebrate the holiday (66%) and be with their family and friends (60%).

3. There’s a good chance you’ll see someone you know in the parade.

Nearly 1 in 5 residents reported themselves and/or their family are in the St. Patrick’s Day parade. Those are pretty good odds, if you ask us.

4. The party starts early in the morning, despite the parade beginning at noon.

5. CNY residents like to go green for the parade.

The typical parade-goer stated that two-thirds of their outfit will be green. However, 10% of attendees plan to wear all and only green attire.

6. The free St. Patrick’s Day parade puts some in the mood to be big spenders.

On average, parade attendees estimated spending $78.70 while celebrating in Downtown Syracuse. A small percentage of respondents estimated they would be spending $250 or more at the parade (2%). That's a lot of celebrating!

7. Parking continues to be a barrier to attend the parade.

For the second year in a row, the top reason people choose to not go to the parade was due to difficulty parking (37%). Similarly, others noted they dislike the crowd (31%).

For those not attending the parade, most CNY residents plan to spend time with family and friends doing other activities (38%). One-fourth of residents still plan to celebrate St. Patrick’s Day, just not at the parade itself.

9. For some, NCAA basketball comes before St. Patrick’s Day celebrations.

10. Tradition wins out when it comes to the St. Patrick’s Day Parade.

Just over half of CNY residents said they were interested in attending the parade for the sake of tradition (54%). While others were interested because they want to go to the bars and restaurants downtown (44%) or party (26%). Why pass up a chance to celebrate your Irish roots (or Ireland in general) with your family and friends like you do every year?

Take a peek at the official infographic for the Central New York St. Patrick’s Day Parade Survey below for more fun facts.

Drive Research is a market research company located in Syracuse, NY. Our team works with organizations small and large all across the United States and world. We design, field, analyze, and report on surveys like the CNY St. Patrick’s Day Parade Survey every day.

② Email us at info@driveresearch.com