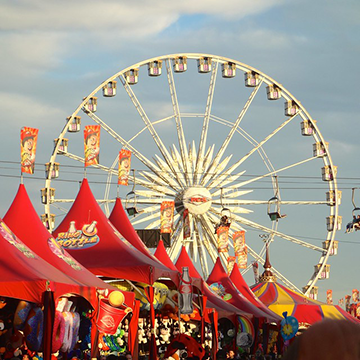 Drive Research was the official intercept survey company for the New York State Fair in 2016. The 12-day event drew 1.1 million visitors, which was a new attendance record. The Drive team was there to witness the spectacle, the crowds, the food, and the fun, collecting visitor feedback through our intercept survey script. The survey was the only officially sanctioned survey with in-the-moment visitors to The Great New York State Fair. If you were at the Fair in 2016, you may have recognized "Team Yellow" wearing bright yellow t-shirts with the State Fair logo on the front and the statement "Share Your Experience With Us" on the back. The Drive Research team also wore lanyards with badges and had large posters at each gate attracting attention.

What were the objectives of the market research?

With significant changes coming to the Fair in 2016, the clients wanted to better understand the impact and perceptions the changes had on attendance and perceptions. The annual intercept survey aimed to collect in-depth feedback from a variety of visitors as they exited. The goals of the survey were to better profile and understand the New York State Fair audience, awareness and impact of changes and events, behaviors at the Fair, money spent while at the Fair, media habits, and other key demographics.

What was the approach and methodology of the market research?

The extensive survey was reworked into a 4-page booklet to improve the interviewing experience. A team of 4 Drive Research interviewers were assigned to collect feedback over the 12 days at the Fair (Thursday, August 25 through Monday, September 5 - Labor Day.) The interviewing team randomly selected participants as they exited as they were screened to ensure they qualify for the survey. A random selection of participants is essential in market research to ensure the sample is predictive of the population as a whole. This ensures the survey completes are representative and not biased based on sample make-up as is the case with self-selection bias.

The interviewing team rotated around each day at different gates to ensure the sample was as reflective as possible. Interviews started at approximately 2:00 PM each day and lasted until the early evening or until quotas were met for the day. Surveys lasted an average of 10 minutes. A total of approximately 50 completed surveys were obtained each day for a total of 600+ completes over the course of the 12 days.

Surveys were administered on paper and clipboards to ensure the interview would move as quickly as possible. With the number of open-ends in the survey document, paper and clipboard proved to test faster than tablets where interviewers would be forced to type responses. Using this traditional channel also avoided any potential technical difficulties which may occur with tablets. The data entry was logged into an Excel CSV file for analysis in SPSS.

What were the results of the market research?

The results of the survey remain confidential with the New York State Fair, the Fair's advertising agency, and the market research company conducting the analysis. The Drive Research interviewers captured all of the relevant feedback the Fair requested, from items fairgoers liked the best to items fairgoers would like to see improved. The results of the survey were benchmarked against past years to compare trends. The data provided to the stakeholders offered an endless amount of insight and opportunity for strategy development heading into the 2017 event.

Drive Research is an intercept survey company in Syracuse, NY. Would you like to conduct a survey in the Upstate New York area? Contact Drive at 315-303-2040 or email us at info@driveresearch.com.