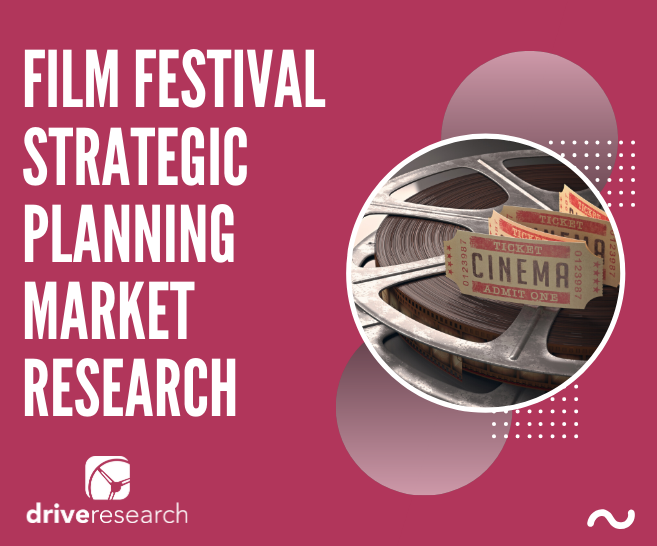 Objectives of the Market Research

The Syracuse International Film Festival partnered with Drive Research to conduct strategic planning market research to grow awareness, interest and attendance to its 2017 SpringFest and 2017 Film Festival. The market research study provided the Film Festival with a comprehensive overview of potential marketing strategies as provided by non-attendees, attendees, and other like-market film festival experts across the country. This data and feedback fueled a strategic plan for the Syracuse Film Festival for 2017 and beyond. It evaluated and prioritized marketing actions.

SpringFest runs in late-April and the Film Festival runs in mid-to-late-October.

To address the objectives at-hand, Drive Research recommended the following market research approach to the Film Festival: (1) 5 in-depth interviews (IDIs) with key stakeholders (directors, marketing managers, etc.) in similar markets across the country which host film festivals; and (2) an online survey to the Film Festival database of newsletter sign-ups, past attendees, and other contacts on-hand.

A combination of qualitative and quantitative methodologies allowed the strategic plan to be driven by both exploratory data from the interviews and measurable data from the survey. This created a comprehensive and cohesive overview of strategy.

Before the market research began, Drive Research scheduled a kickoff meeting with the Film Festival team. An agenda was sent prior to the meeting which highlighted expectations, timeline, and next steps. At the conclusion of the kickoff meeting, Drive Research prepared a living project workplan which detailed deliverables, responsible parties, and dates of completion. This workplan was updated each week and shared throughout the life of the project.

Drive Research prepared a preliminary list of like-markets that hosted film festivals across the country so priority targets could be discussed at the kickoff meeting. Drive was also responsible for gathering appropriate names and contact information for these in-depth interviews (IDIs). The Film Festival passed Drive Research a file which included contact information which had been collected over the years for survey usage.

All good strategies and market research plans start with a kickoff meeting.

The in-depth interviews (IDIs) lasted approximately 15 to 20 minutes each. Each interview was pre-scheduled and digitally recorded. The research interviews aimed to understand unique events at other film festivals which attract attendees, what has worked, what has not worked, beneficial collaborations with local organizations, recommendations to improve visibility and attendance, understanding their usage of marketing channels, as well as other objectives. Ultimately, this exploratory research helped the Film Festival understand how other festivals in similar markets succeed. Drive Research passed the Film Festival a draft interview guide for review before scheduling the interviews.

Similar to the interviews, a draft survey was passed to the Film Festival before fieldwork began online. The online survey was drafted, tested, and programmed online by Drive Research.

Invitations to take the survey were sent to the Film Festival contact database, be shared on social media, and an online panel was used to collect completed surveys in the Central New York area. The survey aimed to understand satisfaction if respondents attended past events, drivers to attendance, what it would take to get non-attendees to go, tested interest in appeal in new ideas for the 2017 events, as well as other objectives.

The strategic plan market research report was compiled into a PowerPoint document and was delivered in a PDF. At the conclusion of the set up and fieldwork Drive Research sent the Film Festival a draft report which included detailed sections from each step of the market research.

The strategic plan report also answered several key questions and made recommendations for the Film Festival to follow for the next 3 to 5 years. The core areas of focus for the next steps involved the following marketing and strategy areas: